Our technological sector is what allows us to guarantee the best service for each of your projects and has been created on the basis of years of experience and continuous updates.

The technology and specifications necessary to guarantee an ideal service change over time – that is why we accept the challenge by continuing to update ourselves. Both in terms of the technology underlying the services and in terms of expanding resources, without any increase in costs for the customer.

The ideal tool is efficient yet simple to use. The first goal of the Artera Stack is to be accessible and easy to use, while maintaining the best performance on the market. This is why we use it for both Shared Hosting and Cloud Server. 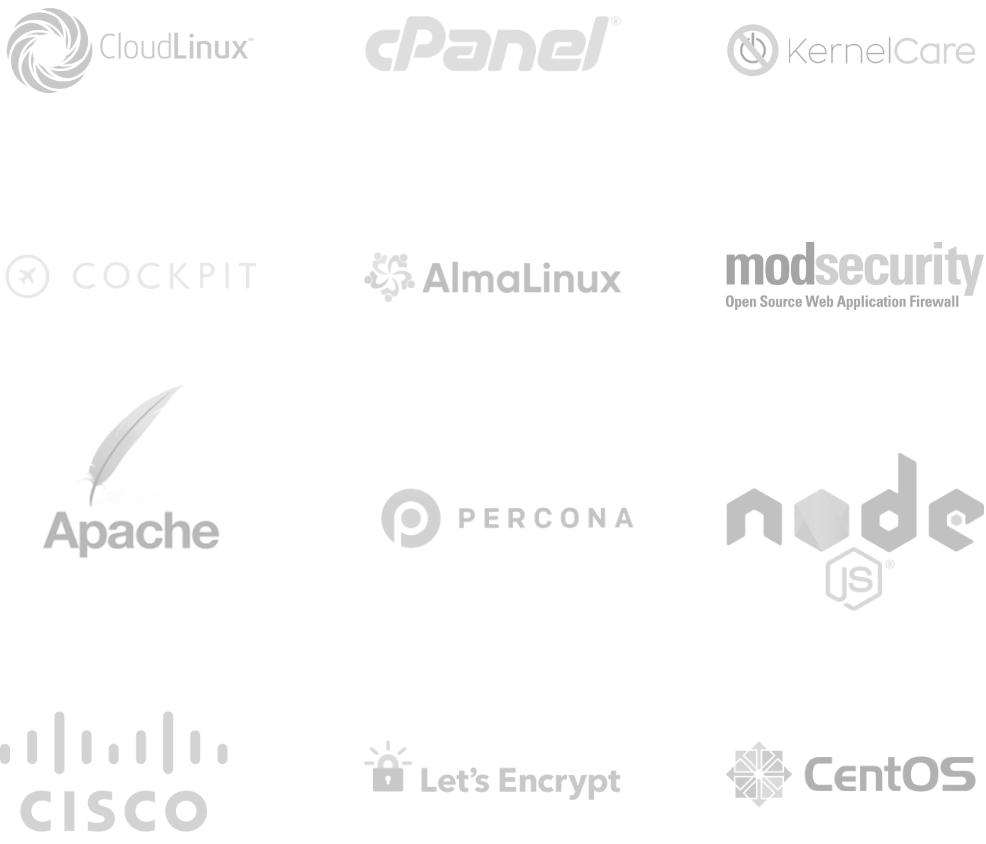 An easy-to-use panel
The Artera Stack uses Apache as a web server, fully integrated into WHM/cPanel, allowing a very simple management through a web control panel even for your less experienced customers.

CPanel CPanel is one of the most used and appreciated management platforms online, thanks to its reliable and intuitive interface and its customizable features that allow automated management letting you focus on your business.

Cloud Linux The operating system for shared server multi-tenancy. By isolating each client in a separate environment, you can partition, allocate and limit server resources such as memory, CPU and connections according to the needs of the individual user.

Kernel-care Automated live patching of Linux kernels offering centralized management and integrating common automation and vulnerability management tools. All this by applying the patches of the shared libraries without any service interruption.

ModSecurity The WAF allows you to control the incoming and outgoing HTTP traffic from a web service. By doing this, you can prevent attacks that exploit vulnerabilities in certain applications, such as SQL Injection or Cross-Site Scripting (XSS). Ruleset: Comodo and Artera

Washing machine The ideal protection against DDoS attacks, through the mitigation of the access points used by these attacks, which usually exploit the specific limits of a given network resource, such as the infrastructure on which a company website is based.

Apache This free server developed by the Apache Software Foundation is the most popular Modular Web server platform at the moment. Precisely thanks to its reputation, Apache is easier to use and configure because of the online documentation and to customize thanks to modulation.

PHP (from 5.4 to 8.1) PHP is an interpreted scripting language, originally intended for programming dynamic web pages. The PHP interpreter is free software distributed under the PHP License.

Ruby Ruby is an open source object-oriented interpreted programming language. The success of Framework like Ruby on Rails allowed it to be among the top 10 most popular and used languages.

R1 Soft Unlike traditional backups, after initial replication, Server Backup Manager continuously monitors changes to your data and saves only the bits of information that have changed, keeping those critical resources free to serve your customers’ needs.

Exim Exim is a mail transfer agent (MTA) used on Unix-like operating systems. Distributed under the terms of the GNU General Public License, 60% of publicly reachable mail servers on the Internet run Exim, which makes it the most popular mail server due to its flexibility with extensive facilities.

Dovecot (with sieve filters) Dovecot is an open source Mail Delivery Agent for Linux and Unix-like systems, designed to guarantee the security of an E-mail Server. With over 3 million mail servers and 68% of IMAP servers globally, Sieve is a real programming language dedicated to mail filtering.

Mail Scanner MailScanner is a highly respected open source e-mail security system designed for Linux based e-mail gateways. MailScanner scans e-mails for viruses, spam (via Spamassassin), phishing, malware and other attacks against security vulnerabilities and plays a vital role in the security of a network. Ruleset: standard and Artera.

A safe and customizable panel

AlmaLinux In accordance with our adhesion to open source software, Almalinux is an Open Source Linux distribution and always free. Community-controlled for business and focused on long-term stability, it provides a robust production-grade platform.

Kernel-care Automating updates through live patching of Linux kernels, in order to offer the application of library patches without the need to interrupt the service in progress and by integrating centralized management.

Cockpit Cockpit is a Red Hat sponsored server administration tool aimed at providing a modern looking and easy-to-use interface for managing and administering servers. Cockpit excels in terms of security thanks to light services and the absence of dangerous APIs.

ModSecurity Attacks that exploit application vulnerabilities or their own limitations can be mitigated and resolved thanks to the WAF, which controls incoming and outgoing HTTP traffic in order to avoid SQL Injection or Cross-Site Scripting (XSS). Ruleset: Comodo and Artera.

SeLinux (Enforced) A security architecture for Linux® systems, which offers administrators a higher level of control over the users authorized to access the system, whose control system uses Linux Security Modules (LSM).

Washing machine The ideal protection against DDoS attacks, through the mitigation of the access points used by these attacks, which usually exploit the specific limits of a given network resource, such as the infrastructure on which a company website is based.

Imunify Allows you to identify malicious files by carrying out automatic cleaning in 99.99% of cases. Particularly useful against files that fall into the categories of backdoors, viruses, phishing, web-shells and hacking tools thanks to its advanced file de-obfuscation techniques.

NGINX Artera This web server, particularly light and with high performances, was created by Igor Sysoev, who released the first version in 2004 after about two years of work. It is currently distributed as open source software under a BSD-like license.

PageSpeed PageSpeed Insights by Google is one of the most widely used web page speed measurement tools internationally. Always at the forefront of web performance optimization and tools, thanks to a series of tools dedicated to different types of users and to every need.

Earlyoom Ideal system that checks the amount of available memory and free swap up to 10 times per second (scaling based on memory). By default, if both are below 10%, it will kill the largest process (the highest oom_score).

PHP (from 5.4 to 8.1) Created for the programming of dynamic web pages, PHP is a freely interpreted scripting language distributed under the PHP License.

Ruby Made famous by the success of frameworks like Ruby on Rails, it currently ranks among the top 10 most used languages ​​in the world. It is also an open source interpreted programming language.

R1 Soft Backup system that allows a better optimization of resources, as it simply takes care of a first copy of the files and then updates only the bits of information that are changed, for a better user experience for your customers.

Redis An open source in-memory structured data store, used as a database, cache and message broker. For maximum performance, Redis works with an in-memory dataset and supports asynchronous replication, auto-reconnection with partial resynchronization on division of the network.

Varnish HTTP accelerator designed for high-content dynamic websites. Contrary to other web accelerators, Varnish was specifically designed as an HTTP accelerator, unlike other proxy servers which often support FTP, SMTP, and other network protocols.

Netdata An open source tool designed to collect metrics in real time, such as CPU usage, disk activity, bandwidth usage, website visits, etc. and then display them in live graphs, easy to interpret.

Artera, applying the vision of CTO Massimiliano Torromeo, prefers open source software for its solutions, i.e. programs characterized by the absence of copyright restrictions, as well as by their development and distribution model. This choice allows our customers to customize the software code according to their needs without restrictions given by suppliers, with greater transparency and flexibility of use. The open source community allows for greater technological innovation and attracts more and more professionals with extraordinary technical skills.
FEATURES

The best site is safe, fast and always online. All this can only be achieved with dedicated functions.

External threats, such as attacks aimed at depleting your site's resources, will collide with our ongoing protection from CSF Firewalls.

Our WAFs (Web Application Firewall) will protect your sites by automatically filtering HTTP traffic to prevent attacks such as XSS or SQL Injection.

Dedicated functions that make the difference.

A sudden surge in users can bring many portals to their knees, but not ours: the automatic web traffic upgrade will allow you to manage the peak periods of use of your site. Activate it on all our premium managed hosting packages.

We integrate consultants in the team who constantly work to safeguard privacy and make sure that all services comply with the GDPR legislation.

Being fully operational on a 24/7 basis this Control Room can detect in advance and prevent any infrastructural anomalies, to guarantee the continuity of the service.

The hardware we put at your disposal is of the highest technological level available on the market.

The latest generation of Cisco Blade Servers guarantee the best reliability thanks to complete redundancy in the absence of "bare metal" machines.

Immediate transfer of data and information thanks to the powerful IBM “full flash” devices that manage the storage, made up of strictly enterprise-class SSD hard drive batteries.

Network switches are instead provided by Hewlett-Packard and operate connections managed in vLan for maximum security.

Routing, on the other hand, is entrusted to Juniper Networks hardware, a historic leader in networking.

Do you want to know where your data is physically? We are one of the few cloud providers that can guarantee the geographical position with certainty while keeping everything redundant. Our connectivity provider is Cogent Communications, one of the largest global Tier 1 networks.

The guarantee of staying in Switzerland

Our Data Centres are located exclusively in Switzerland and you will be the only one who can access your information, always knowing where it is. Thus we can not only guarantee the best security in terms of privacy, but also the best reliability based on tested and state-of-the-art hardware.

Artera operates in perfect accordance with the regulations imposed by the GDPR, as Switzerland is one of the few states recognized by the authority for its high level of protection.

Interconnected with the best suppliers in the world.

Artera has been recognized by numerous certifications as regards the quality of their services, by CISPE (data protection) and others relating to privacy, security and functionality.

To protect the world we live in, change must take place in every sector. This is why our data centres are powered only by renewable energy sources.

Our service features an ongoing relationship with customers and that is why we offer only the best assistance based on cutting-edge tools and a team of professionals in every sector.

Our ticket system is highly optimized and adapts to any form of communication chosen by the clients so that they can communicate with us in the way they prefer. Each e-mail and phone call corresponds to a ticket, which can be easily managed from your control panel.

Assistance also varies according to the customer's needs, and for this reason we offer you the possibility to customize it.

Do you want the security of being able to receive assistance at any time and every day? Choose the 24h/7 Prime support extension.

Among the best professionals in the IT world, they are capable of intervening for any types of problems, representing the guarantee of Artera assistance.

Are you a web agency
or a freelancerdeveloper?

Parternership
Discover the advantages reserved for our Partners, starting with the always included technical support, up to discounts and commissions.

You will have technicians available for the migration of each project to Artera.

Among the most sought after professionals on the web, at your service at no additional cost.

We pay the utmost attention to our customers, so do not hesitate to contact us for questions, doubts or clarifications.

Discover the quality of our service.

The best way to start is to try

Register now: it's free and without obligation